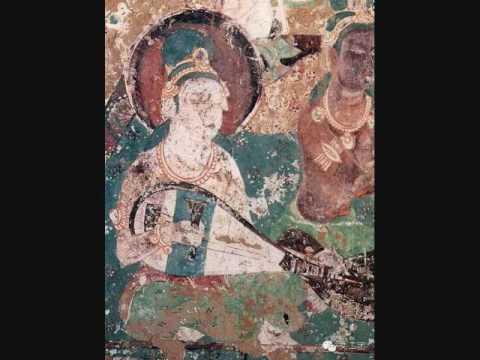 The pieces were arranged by Xi Zhenguan (席臻贯, 1941-1994), based on the work of Ye Dong (叶栋, 1930-1989). The instruments used in these recordings are traditional Chinese instruments of the modern variety rather than replicas of those used during the Tang Dynasty, and the arrangements show the influence of Westernized "guoyue" (国乐) performed by modern Chinese orchestras (minzu yuetuan, 民族乐团).

Also known as Dunhuang Qupu, 《敦煌曲谱》 or Dunhuang Juanzipu 《敦煌卷子谱》), the Dunhuang pipa scores were found in Mogao Cave 17 near Dunhuang in Gansu province, northwest China. They comprise 25 pieces in pipa tablature with instructions for the tablature (manuscript P.3539), plus an additional incomplete piece (manuscript P.3719), all written on the backs of scrolls containing Buddhist texts. These three manuscripts, which were among up to 50,000 manuscripts that had been stored in the cave since it was walled off for unknown reasons early in the 11th century, were taken in 1908 to the Bibliothèque nationale de France in Paris by the French sinoloist Paul Pelliot (1878-1945).

The pieces in P.3808 are believed to be the pipa parts of ensemble pieces, probably court yanyue (燕乐 or 宴乐, banquet music) pieces. On the front of the manuscript is the text of a Buddhist sermon, 《长兴四年中兴殿应圣节讲经文》, with 长兴四年 meaning the fourth year of the Changxing reign of Emperor Li Dan 李亶 of Later Tang 后唐, during the Five Dynasties and Ten Kingdoms period that began following the fall of the Tang Dynasty--that is, 933 AD. Although these pieces were written down in the 10th century (in or soon after the year 933), many or all of them are likely to have by that time already been old pieces, dating to at least the 8th century (the titles of several of the pieces are listed in Tang palace records).

These recordings probably come from this set:
http://nxtmarket.info/item/44590606377