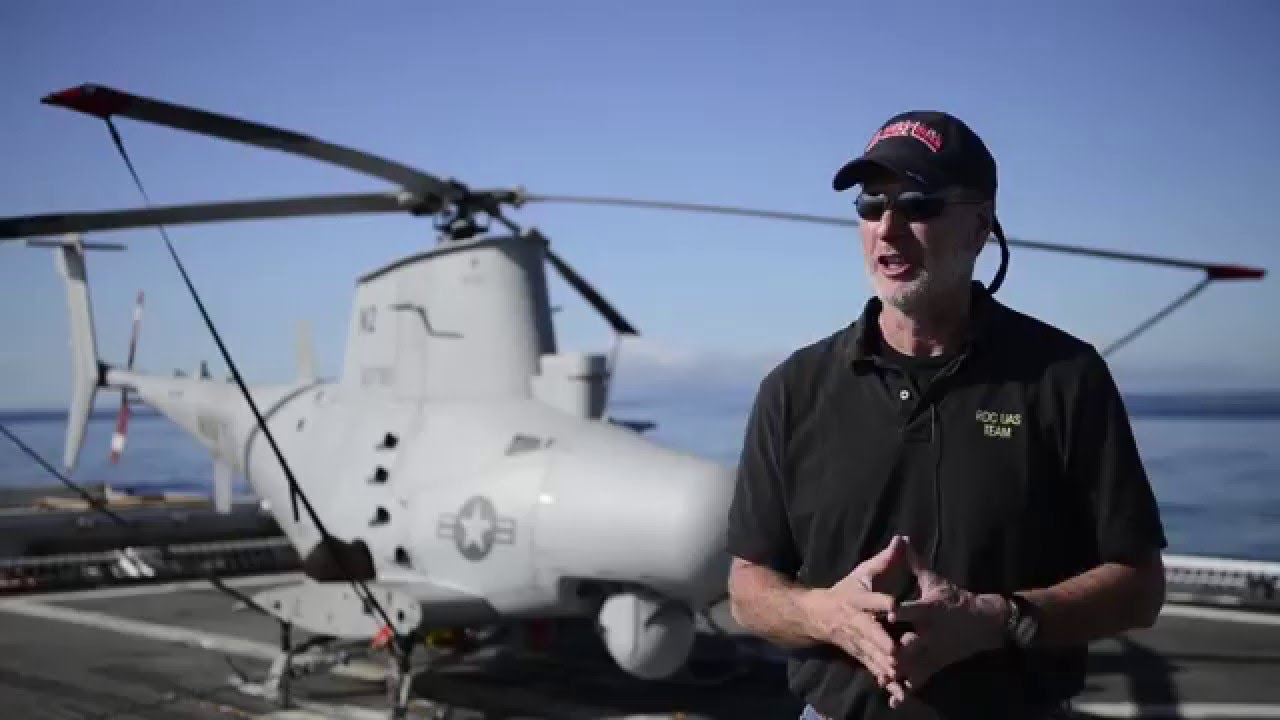 The Northrop Grumman MQ-8 Fire Scout is an unmanned autonomous helicopter developed by Northrop Grumman for use by the United States Armed Forces. The Fire Scout is designed to provide reconnaissance,...
The Northrop Grumman MQ-8 Fire Scout is an unmanned autonomous helicopter developed by Northrop Grumman for use by the United States Armed Forces. The Fire Scout is designed to provide reconnaissance, situational awareness, aerial fire support and precision targeting support for ground, air and sea forces. The initial RQ-8A version was based on the Schweizer 330, while the enhanced MQ-8B was derived from the Schweizer 333. The larger MQ-8C Fire Scout variant is based on the Bell 407.
Although progress on the project had been regarded as satisfactory, the Navy decided the Fire Scout didn't meet their needs after all, and cut funding for production in December 2001. However, the development program continued, and Northrop Grumman pitched a range of improved configurations to anyone who was interested. As it turned out, the U.S. Army was very interested, awarding a contract for seven improved RQ-8B evaluation machines in late 2003. In 2006, it was redesignated MQ-8B.
The MQ-8B features a four-blade main rotor, in contrast to the larger-diameter three-blade rotor of the RQ-8A, to reduce noise and improve lift capacity and performance. The four-blade rotor had already been evaluated on Fire Scout prototypes. They boost gross takeoff weight by 500 lb to 3,150 lb (by 225 kg to 1,430 kg), with payloads of up to 700 lb (320 kg) for short-range missions. The length of the MQ-8B is 23.95 ft (7.3 m), the width is 6.20 ft (1.9 m), and the height is 9.71ft (2.9 m)
The MQ-8B is fitted with stub wings which serve both an aerodynamic purpose as well as an armament carriage location. Weapons to be carried include Hellfire missiles, Viper Strike laser-guided glide weapons, and, in particular, pods carrying the Advanced Precision Kill Weapon System (APKWS), a laser-guided 70 mm (2.75 in) folding-fin rocket, which the Army saw as ideal for the modern battlefield. The Army was also interested in using the Fire Scout to carry up to 200 lb (90 kg) of emergency supplies to troops in the field.
MQ-8B Fire Scout at the RIAT
The MQ-8B is being modified to permit rapid swap out of payload configurations. The current sensor configuration of a day/night turret with a laser target designator will remain an option. Alternate sensor payloads in consideration include a TSAR with Moving Target Indicator (MTI) capability, a multispectral sensor, a SIGINT module, the Target Acquisition Minefield Detection System (ASTAMIDS), and the Tactical Common Data Link (TCDL). The Army wanted the Fire Scout to operate as an element of an integrated ground sensor network as well.
In April 2006, production on the flight test airframes was initiated at Northrop Grumman's Unmanned Systems production plant in Moss Point, Mississippi. The first flight of the MQ-8B took place on 18 December 2006 at Naval Air Station Patuxent River. The Army interest revived Navy interest in the program, with the Navy ordering eight Sea Scout MQ-8B derivatives for evaluation. In January 2010, the Army terminated its involvement with the Fire Scout, contending that the RQ-7 Shadow UAV could meet the Army's needs. In 2009, the Navy approved low-rate initial production.
The MQ-8B complements the manned aviation detachments onboard Air Capable ships and is deployed along with either an SH-60B HSL/HSM detachment or a MH-60S HSC detachment. With the planned addition of radar, AIS, and weapons, the MQ-8B shall have many capabilities of the manned SH-60B. It will give air detachments greater flexibility in meeting mission demands, and will free manned aircraft.