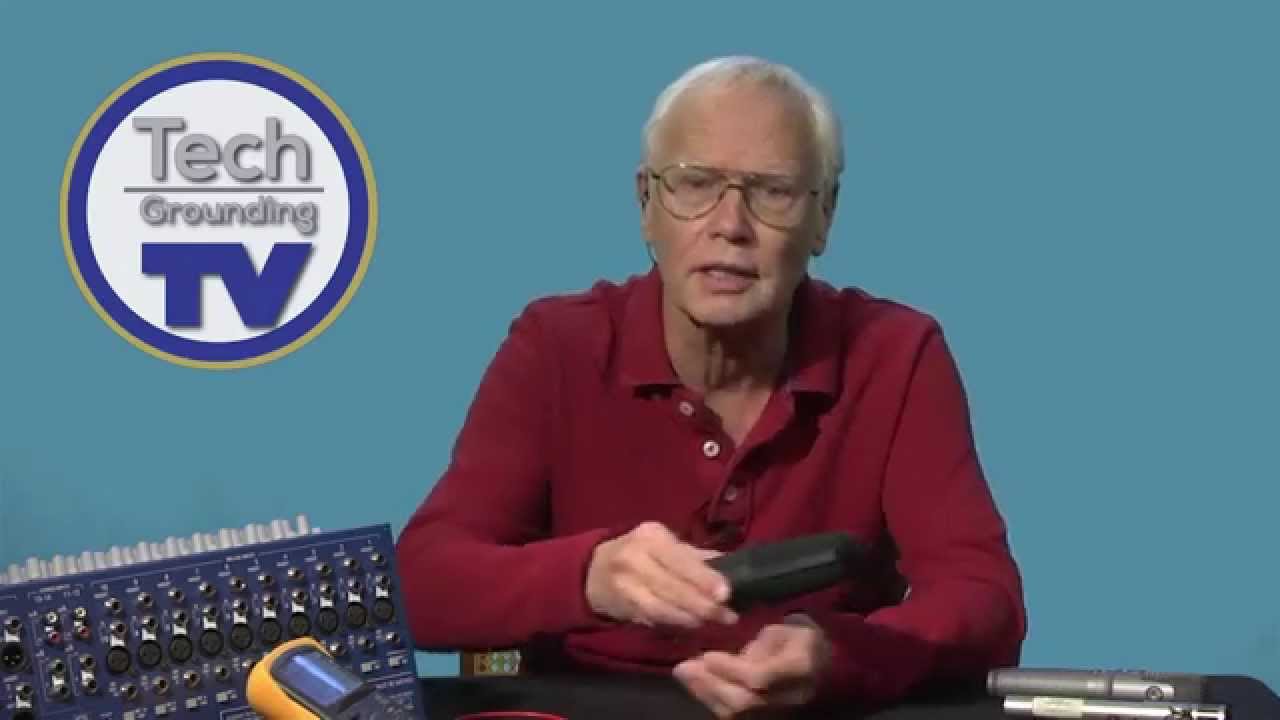 Hello, thanks for looking in to our channel in which we try to pass on helpful bits of information which I’ve picked up over the years working for BBC Television.

Today I’d like to talk about pha...
Hello, thanks for looking in to our channel in which we try to pass on helpful bits of information which I’ve picked up over the years working for BBC Television.

Today I’d like to talk about phantom power.
Most of us know that you have to switch it on when you are using capacitor or other powered microphones.
But what are we doing when we switch it on?

Moving coil, or dynamic, microphones don’t need phantom power because they generate the tiny audio current by simple mechanical means – a coil moves in a magnetic field and that generates the audio signal.

When we come to the more complicated capacitor, or condenser, mikes, there is a problem. They have an amplifier inside them.

This is an Audio Technica capacitor mike and you can see the capacitor assembly here, which picks up the sound, and it’s connected with very short wires – these – to the amplifier.
The wires have to be very short with a capacitor mike because the impedance of the capacitor is very high indeed and any wires longer than a few inches would totally degrade the audio signal. That’s why we can’t just put longer wires on to the capacitor pickup device.

So, the amplifier has to be supplied with some sort of power to make it work.

Some microphones have batteries inside them to supply this power.. Batteries go flat; they leak and wreck your mike; they go down in the middle of a recording; and they cost money to replace.
Hence phantom power.

Let’s have a close look at the XLR connector on the back of this mixer.

I’ve got my voltmeter here to check the pins out.

Pin one of this connector is the ground, or earth connection. So I’ll connect the negative meter lead to pin one.

The phantom power switch is off at the moment.
Let’s see what appears on pin two: no volts. And pin three: no volts.

No lets switch the phantom power on for this channel:

So, if there is no direct connection between the signal pair and ground, then the phantom power will only go where it’s supposed to go – to power the amplifier.

It has to be sort of siphoned off to power the amplifier, and that’s done by means of either an isolating transformer, on older designs of microphone, or by using capacitors which block the direct current, the DC, from getting to the wrong bit of the microphone.

This is getting a bit technical, but if you need to find out more, there’s an excellent tutorial on You Tube at EEVblog #616 – “How Microphone Phantom Powering Works” where Doug Ford of Rode Microphones explains the technical side extremely clearly.

To recap: The 48 volts is available between pin 1, ground, (negative) and pins two and three (positive) of the XLR connector. Pins two ands three of course carry the audio signal.

When you are using mikes with phantom power, do make sure that the cable you are using are proper balanced ones, with the standard two inner conductors and the outer screen. If you accidentally use an unbalanced cable, with only one inner conductor, your microphone won’t work and you risk damaging both the microphone and the mixer. And check that your cables are in good condition – faulty cables can cause havoc when you’re using phantom power.

Just before I go, I’d like to show you a handy gadget I’ve used for years. It’s just a slightly modified male XLR connector containing a couple of LEDs and a couple of resistors. It’s called a “bright eyes” and with this simple gizmo you can instantly check your cables and whether phantom power is present.

When I switch the phantom on, both LEDs light. If only one lights, one of the signal wires in the cable is open circuit. If neither lights, either the ground wire is disconnected or the phantom isn’t switched on at the mixer. Brilliant!

I’ll be showing you how to make one of these bright eyes gadgets in the next video.

I do hope this has helped clear up a few of the mysteries of phantom Power.

See you next time.