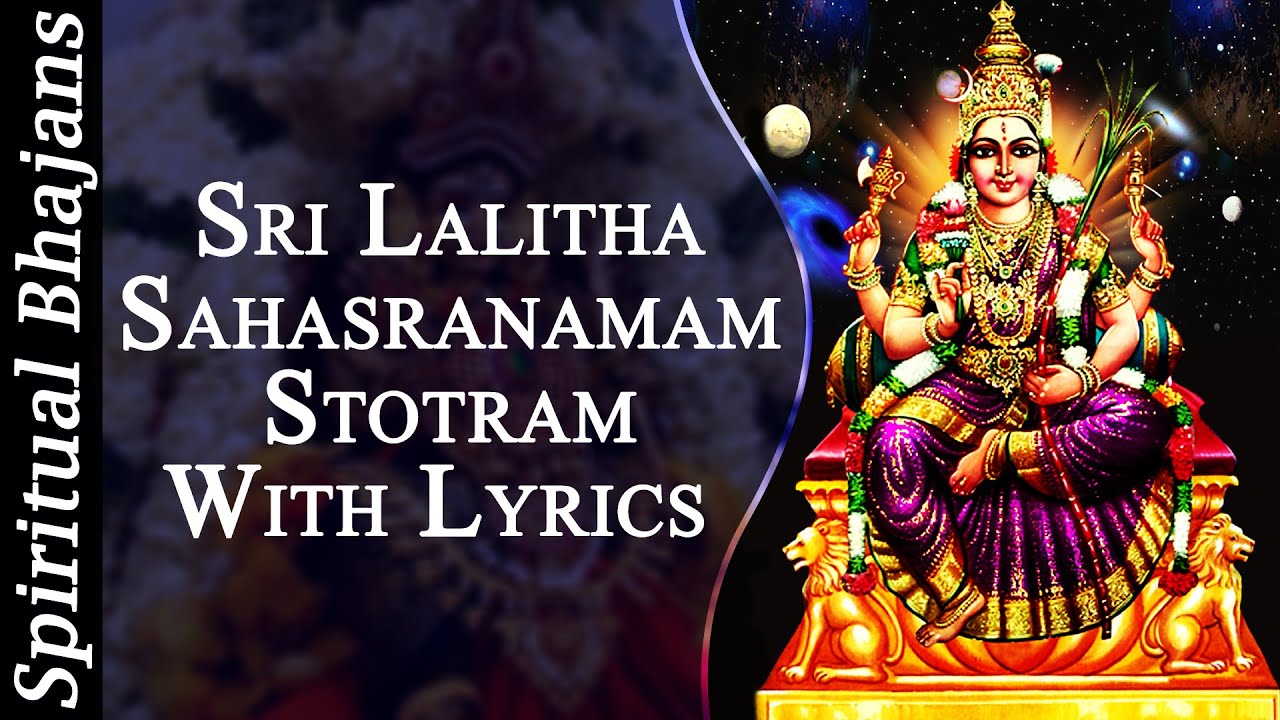 Sree Lalitha Sahasranama Stotram (hymn which praises) occurs in Brahmanda purana (Old epic of the universe) in the Chapter on discussion between Hayagreeva and Agasthya.Hayagreeva is an incarnation of Vishnu with the horse head and is believed to be the storehouse of knowledge. Agasthya is one of the great sages of yore who is one of the stars of the constellation(Great Bear). At his request Hayagreeva taught him the most holy 1000 names of Lalitha.

The devas faced a very great enemy Sura Padma who had a boon that he could be killed only by a son of Shiva and Parvathy. So to wake Shiva from his deep meditation the devas deputed Manmatha , the God of love who shot his flower arrows at Parama shiva. Parama shiva woke up and opened his third eye and burnt the God of love into ashes. The Devas and Rathi Devi the wife of Manmatha requested Parama shiva to give life to Manmatha. Heeding for their request Parama shiva stared at the ashes of Manmatha.From the ashes came Bhandasura Who made all the world as impotent and ruled the city called Shonitha pura.He started troubling the devas.The devas then sought the advice of Sage Narada who advised them to conduct a fire sacrifice. From the fire rose Sri Lalitha Tripura Sundari.
The devas prayed her to kill Bhandasura.When she started for the war with Bandasura, she was accompanied by the powers called anima, mahima etc, Brahmi, Kaumari, Vaishnavi, Varahi, Mahendri, Chamundi, Maha Lakshmi,Nitya Devaths and Avarna Devathas who occupy the Sri Chakra.While Sampatkari devi was the captain of the elephant regiment, Aswarooda devi was the captain of the cavalry.The army was commanded by Dhandini riding on the Charriot called Giri Chakra assisted by Manthrini riding on the chariot called Geya Chakra.Jwala malini protected the army by creating a fire ring around it.ParaShakthi rode in the center on the chariot of Sri Chakra.Nithya Devi destroyed a large chunk of Bandasura’s armies , Bala Devi killed the son of Bandasura, and Manthrini and Dhandini killed his brothers called Vishanga and Vishukra.When the Asuras created blockade for the marching army, Sri Lalitha Tripura sundari created Ganesha with the help of Kameshwara to remove the blockade.Then Bandasura created the asuras called Hiranyaksha, Hiranya Kasipu and Ravana.The Devi created the ten avatars of Vishnu and destroyed them. She killed all his army using Pasupathastra and killed him with Kameshwarasthra.The gods then praised her.She then recreated Manmatha for the good of the world. This story is contained in the first 84 names of the first 34 slokas of Lalitha Sahasranama .and all together contains one thousand names. This is also called the Rahasya Nama Sahasra(the thousand secret names).Reading it,meditating on the meaning of the names would lead to the fulfillment of all the wishes of the devotees.