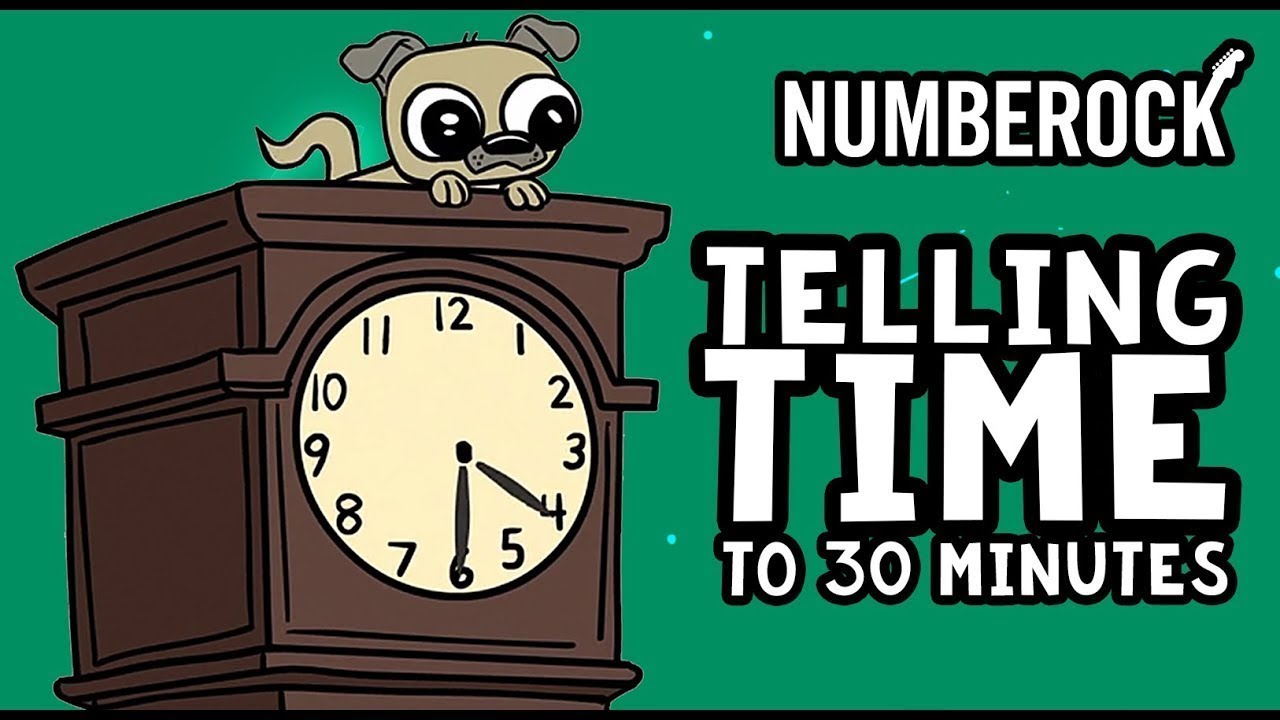 🍎 Enjoy our growing library of math videos beyond Telling Time at https://www.numberock.com 🍎

Get our Telling Time Lesson Plan and Materials Below:
🍎 NUMBEROCK Telling Time: /redirect?red...
🍎 Enjoy our growing library of math videos beyond Telling Time at https://www.numberock.com 🍎

Get our Telling Time Lesson Plan and Materials Below:
🍎 NUMBEROCK Telling Time: /redirect?redir_token=yJUI2u_VEjHm93V419D0YlClM7t8MTU1NTY0MDgyMUAxNTU1NTU0NDIx&event=video_description&v=MaVgBjVh4b8&q=https%3A%2F%2Fwww.teacherspayteachers.com%2FProduct%2FTelling-Time-to-the-Hour-and-Half-Hour-Song-with-Worksheets-Bingo-MORE-3857334 🍎

Video Descriiption:
Gerry will teach you all about telling time to the nearest hour (60 minutes) and half hour (30 minutes), and his friends will rap and sing with him about how different times look on the clock. It's just another day for Gerry, filled with the ups and downs of playing at the park, going out with a friend, and even confronting an embarrassing public moment that we've all surely experienced. Towards the end of the day, he has to sneak his friend Lexi back into her house because it is past her curfew - watch the whole story play out to see whether or not they get caught!!!

I want to tell you all about my Saturday,
but before I do, listen! I've just gotta say:
Sixty minutes make up every hour on the clock,
and thirty minutes is half an hour....tick-tock!
So remember, on a clock, thirty is half an hour.
Now let me tell you of the day that almost went sour.

I was headed to the park; I decided to walk.
As I left, I looked up and saw the time on a clock.
The short hand pointed to the nine, and I knew it was nine
when I saw the long hand made an upward vertical line.
When that long minute hand points right to the twelve,
the short hour hand points to the time we can tell.

When the hour hand’s on a number and the minute hand's up,
we know it's "o'clock," whether breakfast or sup.
If the hour hand's right between two numbers, per se,
it's half past the hour, or six-thirty, that day.
With the long minute hand that represents the minutes gone by,
it's easy to tell time--and soon you'll see why.
Each number on the clock has five minutes in it.
If you skip-count by five, you'll tell the time lickety-split!

After hours playing, I took my sidewalk chalk...
thinking, "Wouldn't it be fun to draw the time on a clock?"
Three thirty: the hour hand is half past three.
The minute hand's at six--halfway 'round--which is thirty.
I remembered I had to meet my friend, Lexi;
her house was far away, so I left in a hurry!

I got to Lexi's door and then rapped… “Knock! Knock!”
She answered the door and was pointing to the clock.
The hour hand was right between the five and the four;
the minute hand was at six, pointing down toward the floor.
So the time was four-thirty, and she looked annoyed!
"You said you'd be coming no later than four." “Oh, boy.”

We went to the movies, and I bought us two tickets.
The movie we went to see started right at six.
The hour hand was at six; the minute hand pointed up.
She said, “Are we almost late?” And I was like, “Yup!”
When we finally got our seat, she told me I was cute,
but I'd eaten beans for lunch and let out a loud toot.

On the way home we walked by the fishing dock.
We looked up and saw that it was now eight o’clock.
The minute hand pointed up; the hour hand, at the eight.
She said, "I’m supposed to be home by now. Oh, great!”
So we went off in a hurry; we ran, we bounded...
to get Lexi home fast so she wouldn’t be grounded!

Common Core Standards Covered:
CCSS 1.MD.B.3 & 1.MD.3
Tell and write time in hours (to the 1 hour) and half-hours (to the 1/2 hour) using analog and digital clocks.

TEKS Standards Covered:
TEK 1.7E Standard Language:
Tell time to the hour and half hour using analog and digital clocks.
Show more
Share DOWNLOAD NEXT VIDEO Submit complaint
Loading...
You are about to download a video in MP4 format.
If you'd like to adjust the format or resolution, just select it here
Download
Download has already started, please wait 10 Seconds