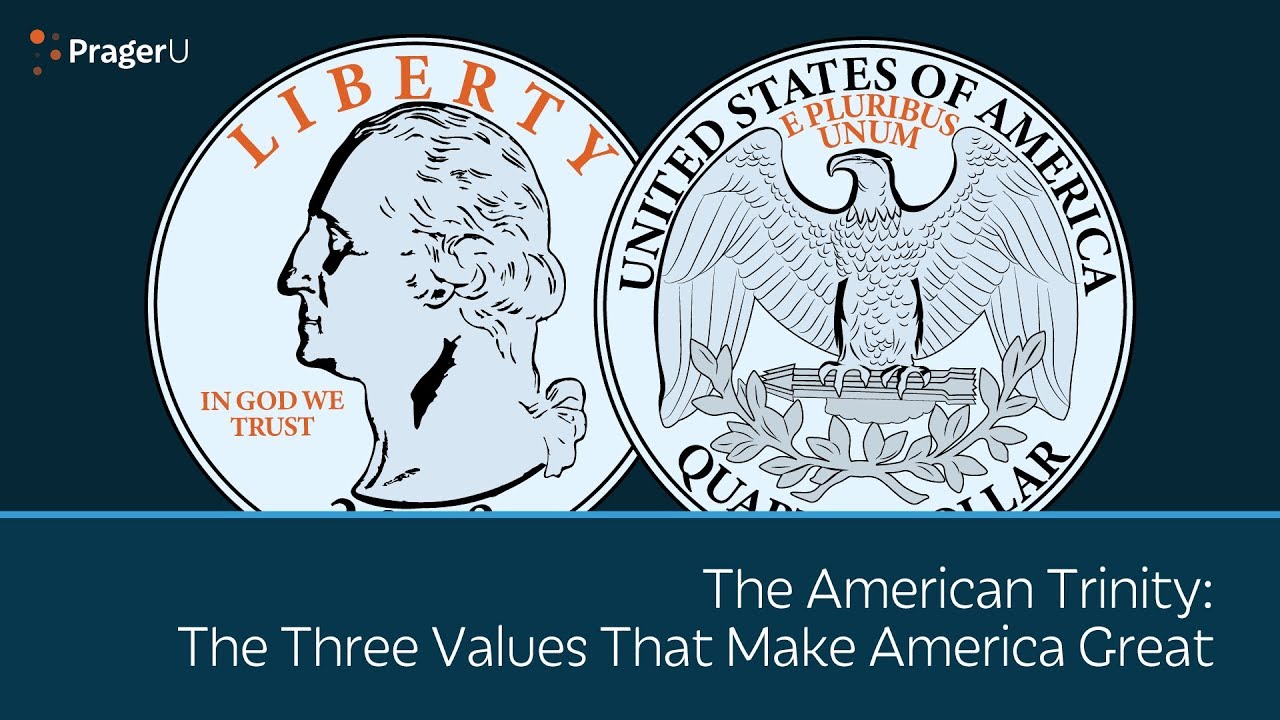 Download Pragerpedia on your iPhone or Android! Thousands of sources and facts at your fingertips.

Join Prager United to get new swag every quarter, exclusive early access to our videos, and an annual TownHall phone call with Dennis Prager! http://l.prageru.com/2c9n6ys

Join PragerU's text list to have these videos, free merchandise giveaways and breaking announcements sent directly to your phone! https://optin.mobiniti.com/prageru

Do you shop on Amazon? Click https://smile.amazon.com and a percentage of every Amazon purchase will be donated to PragerU. Same great products. Same low price. Shopping made meaningful.

Race and ethnicity have defined every nation on earth. Except one: the United States of America. It is defined by values.

I call this “The American Trinity.” I made up the name, but I didn’t make up the values. They are on every American coin.

The first, E Pluribus Unum, is Latin, meaning, “Out of many, one.” When first adopted as an American motto shortly after the American founding in 1776, it referred to the thirteen American colonies becoming one nation. Over time, however, most Americans understood the motto to mean one people from many backgrounds. To quote The E Pluribus Unum Project, funded by the National Endowment for the Humanities, “Over the years, E Pluribus Unum has also served as a reminder of America's bold attempt to make one unified nation of people from many different backgrounds and beliefs.”

In other words, America doesn’t care about your national or ethnic origins.

This explains why people who immigrate to America assimilate faster and more fully than immigrants to any other country.

Most of those who have immigrated to Europe, from, for example, Turkey – as millions have – are not considered fully German by fellow Germans or fully Swedish by fellow Swedes or fully Spanish by fellow Spaniards. This is even true of the children and grandchildren of those immigrants.

Of course, America has not always lived up to this “e pluribus unum” ideal. But the ideal was always there. And it was applied to virtually every immigrant to America.

The second component of the American Trinity is liberty.

The difference is this: The moment you affirm equality, as the French Revolution did, you will lose liberty.

It is a basic American value that all human beings are born equal, and all must be equal before the law. But ending up equal – that's a French and European value. And if you want people to end up equal, you must deprive them of liberty. Which is exactly what happened right after the French Revolution and in every other society that made equality its national goal.

America gives people the liberty to end up wherever their abilities, work ethic, and luck take them – meaning unequal. Therefore, professional athletes will make more money than teachers or doctors. That may be unfortunate, but that is what liberty allows. If you want equality, you will tell people how much they can earn – and that means the end of liberty.